March 4th, the only day that is also a sentence.” ~ John Green 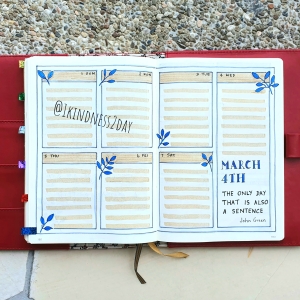 And here’s a peek the first March weekly spread in my bullet journal. I can honestly say that journalling has been a huge help in sorting out the bits and pieces of life.

When I saw today’s prompt, I heard a Voice.

Not just any voice … but the Voice of my primary school math teacher intoning #32 of his Math-isms: Parallel Lines Never Meet.

Which got me thinking about all the “parallels” that have crossed my path: there’s the mighty 38th Parallel, parallel sequences in music, parallel plots, parallel imports, parallel bars, parallel circuits … There are parallel universes, parallels in history – though there are, of course, events and circumstances that remain unparalleled.

Which then triggered the memory of Tom, the boy at the back of the class, who had raised a fascinating question: “If parallel lines never meet, how come we got squares on waffles?” My unparalleled memory (in the worst way) prevents me from recalling the teacher’s response, but I do believe Tom received detention.

Which leads me to the one thing I have never liked about parallels – the parallelogram. I’ve never understood it. If it’s nice and straight and right angled, call it a square or a rectangle or an oblong. If it’s all slanty, with weird angles that students are eternally condemned to calculate the external angles of, call it a rhombus or a diamond or a kite or something other than a parallelogram. I even had to check its spelling and pronounciation before plonking it in this post. If you have a spare moment, try saying ‘parallelogram’ three times fast.

I came across some posts describing the use of Tearable Puns a few weeks ago. Inspired by what these writers had done, I thought I’d try something similar at my workplace.

I typed out some puns I liked, printed them on coloured paper, cut them up and pasted them on contrasting coloured cards. I figured I would pin one pun each week.

On a Monday morning in early February, I pinned a punny card at the corner of my cubicle.

Don’t believe everything you hear about parasites, fleas and ticks – they’re all lice!

I waited. I had no idea if anyone would notice, much less react. In the meantime, there were emails to clear and reports to read.

Then footsteps slowed … stopped … silence … was that a snort? A head bobbed over the divider. “Aargh! That’s so … aargh! But good one!”

In the course of the week, colleagues stopped to giggle or groan. I was even presented with an eye roll by the boss – a considered honour. I knew I’d have to pin another pun the following Monday.

The same thing happened. Better yet: someone asked if I had more of where those came from. Sure I had; I put another one up the next Monday … and the next.

Fast forward to this week. A colleague stopped by to say: “You know, I was so fed up with the whole meeting! Then I saw your pun on my way to my desk and I just had to laugh. I tell you, my mood did a one-eighty. Keep putting those things up!”

So there you go. An idea from bloggers is bringing some light hearted moments to a workplace in another part of the world.

To Laura Randazzo and Reading While Eating, thank you for the inspiration. To Through Open Lens, thank you for posting jokes with your pictures. A bunch of people now get a little sparkle of joy each week because of your kindness and generosity in sharing something witty. 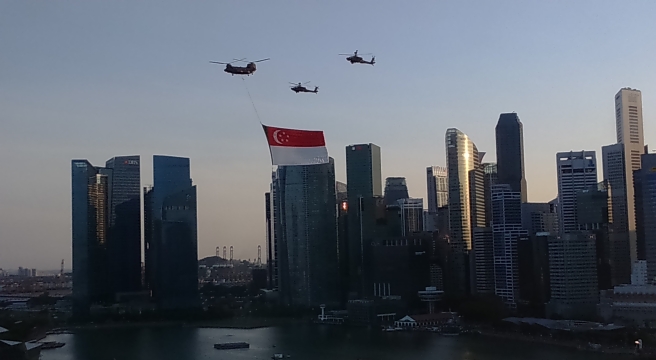 FANBOYS, ROY B GIV, MICE … No matter what the subject, mnemonics have served learners all over the world well.

My country’s flag has five stars and a crescent moon. At school, most kids have no problems explaining what the moon represents. But the five stars? We’ve heard everything from lights to twinkles.

About a decade ago, Pirates of the Caribbean: At World’s End reached our shores. Somewhere in the movie is a scene where Captain Sao Feng (Chow Yun Fatt), the Pirate Lord of Singapore, says, “Welcome to Singapore,” to the merry band of sailors here to rescue Jack Sparrow.

Historically, that wasn’t even what our country was called in the 1700s. But that’s not the point. My friends and I had an epiphany: Sparrow – Johnny Depp – star – Singapore! That was it!

Justice, Democracy, Equality, Peace, Progress. Those are the ideals as depicted by the five stars on the state flag.

And thanks to J Depp, I haven’t forgotten them yet.

Egg. Perfectly formed, self-contained, nutritious, a cradle of life … is there anything more perfect than this?

‘Egg’ – the noun – has survived centuries of use but remains relatively unchanged from the Middle English ‘egg’ and its ancestor, the Old Norse ‘egg’. A simple word, it has contributed to a range of expressions over time: good egg, rotten egg (reportedly 1848), egg on your face (reportedly 1936), nest egg. It is part of relevant advice today: don’t put all your eggs in one basket (Cervantes in Don Quixote, 1605) and it is also an insult: go suck an egg (1930s).

‘Egg’ – the verb – represents encouragement, e.g., egg someone on. The thing is, the Old Norse etymology of ‘egg’ is the same as ‘edge’. So to egg someone on, back in the day, was to edge someone on, i.e., to provoke or drive to the edge. Technically, therefore, you could egg an egg to the egg. But I digress.

‘Egg’ – the food – is even more, well, egg-citing. Its cooking methods are diverse: hard-boiled, coddled, poached, fried, scrambled. It is integral in souffles, custards, soups and drinks. And let’s not forget caviar.

‘Egg’ is a poster child of cultural diversity: Huevos Rancheros, tamagoyaki, century egg, omelette, frittata. If you’re interested, see here for international breakfast egg recipes! By the way, while a London firm claims to have invented the Scotch Egg in the 1700s, it was apparently already being served during the Mughal Empire, founded in 1526!

‘Egg’ becomes a tool for vandalism when it is thrown at someone’s house, i.e., egging. I know of a much-hated teacher whose students once cracked raw eggs on his car; it was parked in the sun.

‘Egg’ is part of folklore and tradition. It is said to cure illnesses, hangovers and foretell the future. It symbolises new life, birth and resurrection. The Chinese, for instance, distribute hard-boiled eggs dyed red to friends and family to celebrate a baby’s first month or first year.

‘Egg’ is a decorative item – who can ignore the beauty of an ostrich egg lamp? Or a Faberge egg?

‘Egg’ has cult followings – an egg yolk called Gudetama has spawned restaurants, merchandise and a near rock star status. And who has never heard of Humpty Dumpty?

I’d love to hear how the egg features in your culture. Please do share by leaving a comment!