I was reading an online interview about J K Rowling and overcoming adversity, and this quote popped up.

I would love to know who said this.

She broke a vase
The shriek was loud
She broke his heart
The silence was deafening.

He stole a bicycle
His mother’s smack stung
He stole her innocence
His community’s curses clung.

He drank to forget
He drowned in regret.
She stifled her dreams
Guilt drowned her instead.

My colleague, Sandy Mohan, was sent to collect some documents and resource packs from an associate from another division.

Sandy called the office ten minutes after the designated time to say Christine Li had yet to arrive. Had there been a message to the office? What should she do?

We checked with Christine’s office, only to be told she had called to say she couldn’t find Sandy at the location. Was there a mistake in the venue? Or time or day? Or something?

The mystery was solved when Sandy returned to the office and told her story in fits of giggles.

Even in a multicultural and multiracial environment where I work, this incident continues to cause hilarity. Sandy and Christine have become close friends. And I’m thankful we can all laugh along and celebrate our diversity.

I’ve been a bit remiss in the kindness department lately. I created this blog to acknowledge and thank the folks who have shown kindness, either to me or to someone else; then I got distracted with the sheer enjoyment of reading the wonderful and diverse blogs, and writing about all sorts of other things.

Fortunately, my attention hasn’t been completely skewed. Some writers have advocated carrying a notebook around to jot ideas and observations. Thank goodness I took this advice! I’ve been writing down acts of kindness I’ve observed and I’m happy to share three of them today. I’ve also developed a fascination for notebooks as a result, but that’s another story!

I was having lunch with my BFF when we were startled by a man running past our table shouting, “Excuse me! Hello! Excuse me!”

In a foodcourt of casually dressed patrons, a man in suit and tie stands out. When that man runs and yells, everyone pays attention.

Turns out, he was running after an elderly man who had left his table but left his wallet behind.

I was at the bus stop near my place of work, and people-watching while waiting for the bus.

At the traffic crossing, everybody was hurrying to beat the lights. Right there, in the middle of the crossing, a woman suddenly stopped. There were quite a few annoyed glares as she was effectively holding up pedestrian traffic, and getting herself bumped into.

She went back to an elderly lady going in the opposite direction, and who was carrying two shopping bags. She took the bags from her and walked with her to the safety of the other side.

I had just entered my building when a middle-aged lady stopped me to ask if I’d seen a man in a black shirt go by. As it happened, he did indeed pass me moments ago.

“He dropped his keys!” she said, holding up the bunch and peering up and down the street. “Where’d he go?”

There was no one in black. The only possible place he could have disappeared into was the bank. Another man approached. “You looking for a guy looking for his keys? He’s in the bank.”

Off went the middle-aged lady to return said keys.

Do you jiggle when you giggle?
Do you fist pump when you chortle?

Do you whack your companion when you guffaw?
Do you cackle till you hiccup?

Do your eyes crinkle when you chuckle?
Do you wipe spittle when you titter?

Does your bark scare the pigeons?
Does your bray cause dogs to bark?

If laughter is the best medicine,
Tell me –
Why does it split your sides?
And then put you in stitches?

Like the young Kung Fu Panda, I was a bumbling rookie, trying to find my way in an organisation filled with folks who already knew what to do and how to do it. There was no use for a rookie. And then I met the unfortunate Shifu, who was assigned to be my mentor.

He must have had plenty to say, not that I heard any of it. He simply had me shadow him to every conference, meeting, discussion group … you name it, I attended it. Everything I wrote, he checked. Everything I had to present, he checked. Some might say he micromanaged or was bossy or had some sort of negative intention.

All I felt was grateful for a Department Head who bothered to explain things, from how to use the inhouse templates to how not to irritate the clerk so she wouldn’t put your folder at the bottom. He critiqued and found fault. He approved and gave credit. He squabbled over points and lost his temper. He went to bat for something I believed in. We figured out how to work together.

Seven years later, the unimaginable happened. I was promoted to – in a situation of epic tragi-comic proportions – a position that included being Shifu’s supervisor.

And this is where his true colours shone. We had a talk about how to manage this: he saw no reason for either of us to transfer, and assured me he had no issues with me bossing him. Well, I had plenty of issues with that! How was I supposed to tell Shifu what to do? What if I totally disagreed with a decision he’d made? How was I supposed to do his appraisal report, which was inevitable? This was horrible!

I did not train you to be me. I trained you and guided you so that you would be better than me one day. Now get out there, be professional, be objective, be you and do your job.

Today, Shifu is happily retired. We met for lunch two months ago, and will be meeting again soon.

Glancing out the window this afternoon, the spot of red drew my eye.

I observed this brave gentleman pruning the branches of this very tall tree.

Then I wondered: what did he observe? 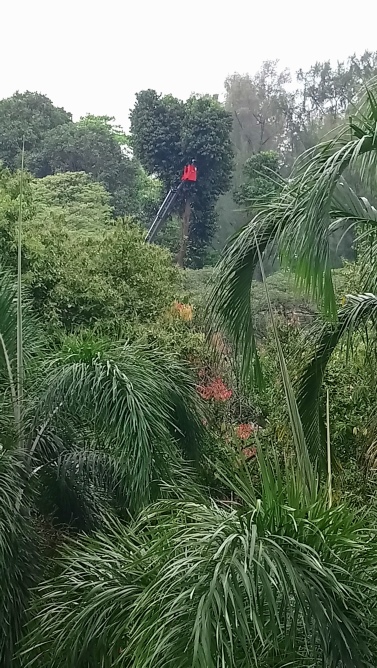 There’s the thin green line
That begins at the gutter
And runs down the wall.
No plumber or contractor ever detected its origin.
So it stays
As a scar on the weathered facade.

There’s the crooked copper line
That starts at the base of the bathtub faucet
And worms itself stubbornly into the drainage hole.
No stain remover or bleach ever made a difference.
So no one uses the tub
With its abberation against the snowy enamel.

There’s the terra cotta line
That seeps from under the dragon pot
And bleeds its way into the neighbour’s plot.
No patching with fresh soil ever fills the hardened trough.
So the neighbours have called a truce
Over this border without a fence.

There’re the pale silvery lines
That weep from beneath closed lids
And trickle down facial planes.
No medicine will heal the wounds.
So hope waits
For belief to touch the soul.